As you plan your volume requirements, please note that the market will be closed for several days prior to and following 19 October 2017 due to Diwali, a religious light festival in India. Sowing quantities were fixed at the start of October: compared to the previous year, 3% fewer castor beans will be sown. This is worrying: in 2016, the cultivation areas were already rated at approx. 20% less than in the year before that. As a result, we anticipate a low surplus for December. We will let you know as soon as we receive more precise figures. Last year, cotton farmers were able to produce a good crop yield, which has resulted in extraordinarily large cotton cultivation areas this year. This rise has in turn caused a loss of cultivation space for other crops.  At present, the prices are still stable. A rise in enquiries from China, the US and Europe are generating fluctuation, however. There will be a 4–5% premium in November and December. At present, seed arrivals at the sources amount to approximately 35,000 bags per day (1 bag equals 75 kg of castor beans).  Monsoon: Moderate to heavy rains fell in July and August this year. The regions of Gujarat, Rajasthan and Assam received particularly intense rains, while the south of India remained relatively unaffected. The following pricing graph provides an overview of the development of castor oil FSG on an FCA Nimwegen basis since June 2014: 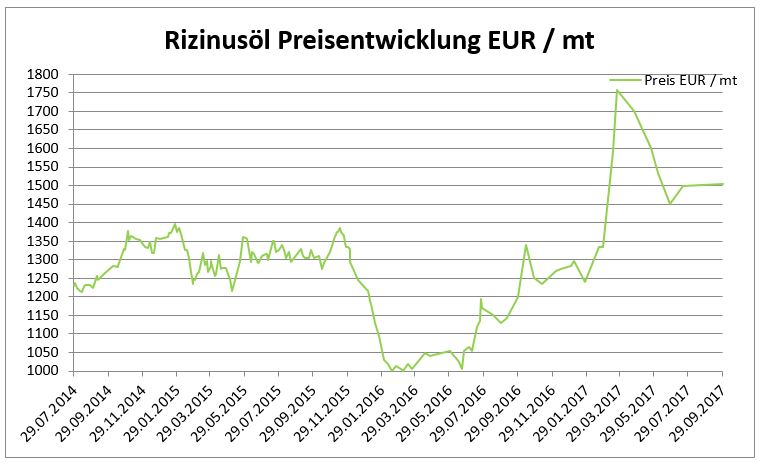 Your personal point of contact will be happy to receive your enquiries. Our product focus besides the whey and proteins is geared towards our vegetable oils; Almond oil, Walnut oil, Apricot kernel oil, Castor oil, Castor oil derivatives, Sesame oil, MCT oil, oils for personal care, Sebacic acid and the world of organic and gourmet oils.