The market has recorded a 4% decline since 23 June 2017. This is due to a tax on goods and services, which is currently under discussion and due to come into force on 1 July 2017. As a result, stock quantities are being kept at a very low level and sold diligently. The price for castor oil is at its lowest level in four months, which has resulted in a positive market demand. At the same time, we must keep in mind that prices may rise in early July 2017, once the tax actually comes into force. Seed arrivals in Gujarat and Rajasthan have continued to decline, reaching a level of approximately 20,000 bags per day (1 bag equals 75 kg of castor beans). This, too, will push prices upwards, as financing and storage costs for the product need to be taken into account. The monsoon might also play an important role. From today’s perspective, everything is still on schedule and no deficits can be seen. The following price chart provides an overview of the development of castor oil FSG on the basis of “FCA Rotterdam” since June 2014: 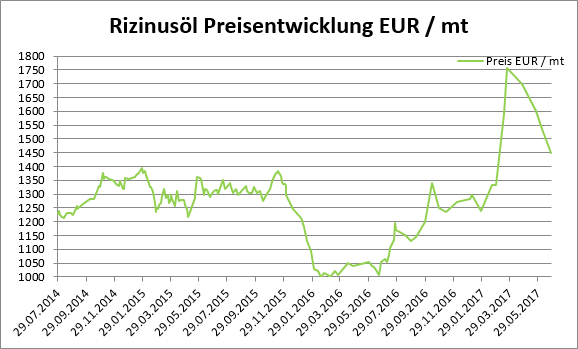