Next weekend, on the 21st and 22nd of February 2015, the yearly Global Castor Congress will be held in Gujarat, India. Topics being discussed during the two-day workshop will mostly include information about the ongoing Castor harvest. These will have a significant influence on the pricing of Castor oil First Special Grade, 12HSA, HCO and Sebacic acid. In particular, there will be discussions regarding futures transactions according to the amount of yield expected from approximately 1.3 – 1.4 tonnes of seed. According to the NCDEX commodity exchange, the current seed stock has been decreasing as per the inventory, as not only Europe, but also China has been buying large volumes over the past weeks. This can especially be attributed to the fact that the congress is rapidly getting closer. In previous years, the market strengthened increasingly during this period, and China have been addressing their requirements prior to the Chinese New Year. Export figures from January 2015 illustrate the global movements of Castor oil First Special Grade, which amounted to approximately 35,000 tonnes. There are still speculators in the market who are predicting a larger harvest far beyond 1.6 million tonnes of seed, but analysts deny this. Following the congress, we will have sufficient clarity to provide you with further information about the anticipated harvest size, the cultivation areas and their expected yield per hectare in the current sowing report for 2015. The following illustrations are intended to explain how the market moved in the past year 2013 at the US Dollar level, and in 2014/2015 at the Euro level. It is clear that just the period from June 2014 up until now has seen a greater volatility of the Castor market, which is heavily influenced by the USD vs. EUR exchange rate development. The below illustration in particular shows the significant weakening of the Euro! Image Castor oil First Special Grade in USD: 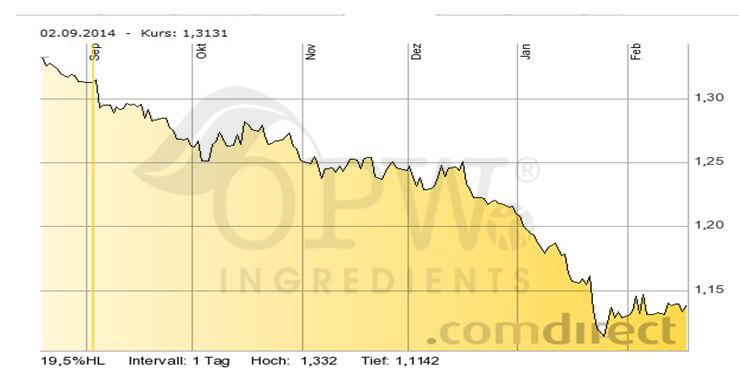 Further topics of the Non-Food conference will be crop cultivation and new technologies and training programmes intended to benefit the growing of Castor plants, the harvest and further processing. The aim is not to commercialise the cultivation, but to improve existing structures and achieve economic advances. We will continue to provide you with information and news after the Castor Congress during the coming week, and are always happy to help you with any specific questions!